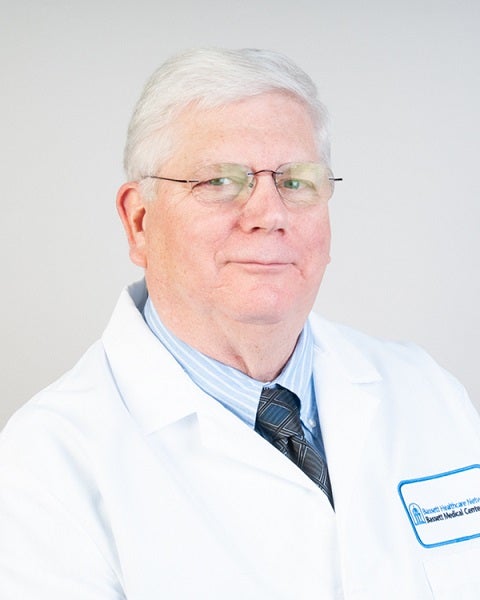 Frank J. King, PA-C, DFAAPA, board-certified physician assistant and a resident of Cooperstown, has been recognized as a Distinguished Fellow of the American Academy of Physician Assistants (AAPA). He is currently a senior physician assistant in the Department of Emergency and Trauma Services at Bassett Medical Center/Bassett HealthCare Network. He has been a PA-C since 1978 and with Bassett Emergency Services since 1998.

Mr. King achieved this distinction for exceptional and sustained contributions to patient care and the physician assistant (PA) profession during his 42-year career. As one of the earliest PAs licensed to practice in New York and a leader in the New York State Society of Physician Assistants (NYSSPA), he contributed substantially to the early progress of the profession. He served as NYSSPA president in 1987 and as board member or committee chair for years both before and after. He also served as delegate to AAPA annual meetings for several years. For over 20 years, he served on the board for Professional Medical Conduct of the New York State Department of Health. Since 2003, his community contributions have been as a volunteer firefighter, emergency medical services, and treasurer for the Cooperstown Fire Department.

Over his 40-plus years as a PA, Frank has practiced in New York and Florida. In addition to his current practice in emergency medicine and urgent care, his PA work has included family practice, administration, and education. He studied at Penn State University and the State University of New York at Stony Brook where he received his B.Sc. PA in 1977 and from 1980 to 1993 was appointed “clinical instructor of Health Sciences.” He is a U.S. Navy veteran having served in Vietnam as a Marine Corps combat corpsman.

PAs are board certified nationally and state-licensed to practice medicine in every setting and specialty. They diagnose and treat patients, order and interpret tests, assist in surgery and perform procedures, make rounds in hospitals and nursing homes, and prescribe medications. A PA's role may also include patient education, administration, and research. PAs are educated at the graduate level through rigorous programs modeled on the medical school curriculum and are viewed as a solution to increasing access to health care for the increasing number of patients entering the system.

Parents: How to Calm Your Children's COVID-19 Concerns

Here are some tips, courtesy of the National Association of School Nurses and other medical experts, for discussing COVID-19 with children:

Former patients, the sewing community, individuals, and local businesses have been donating their time and necessary supplies to supplement the need for personal protective equipment (PPE).