(Some of the following is excerpted from "The Mary Imogene Bassett Hospital" by Clinton VanZandt Hawn, M.D.)

"Is it visionary to think of the hospital of the future and perhaps the not very distant future as a socially progressive health center?"
- Dr. George Miner Mackenzie, Director, The Mary Imogene Bassett Hospital, 1929-1947

The Mary Imogene Bassett Hospital (doing business as Bassett Medical Center) is named in honor of a physician who devoted herself generously for many years to the sick and unfortunate of Cooperstown and the surrounding region.

Among Dr. Bassett's friends and patients was American businessman Edward Severin Clark. He had great admiration for her. According to anecdote, he heard her express a wish for a laboratory to provide scientific data with which she and the other Cooperstown practitioners could better care for their patients. Mr. Clark granted her wish, building not only a laboratory, but a fully-equipped 100-bed fieldstone hospital building. Named "The Mary Imogene Bassett Hospital," it was meant as a living memorial to Dr. Bassett.

The public opening of the hospital came in June 1922, with Dr. Bassett serving as chief-of-staff. Tragically, she died of a stroke at home in October of that year. Mr. Clark directed that the light in the cupola be lit every night in memory of her.

Soon after Dr. Bassett's death, the hospital began struggling to keep its doors open. The 100-bed hospital proved too large for the small village and its local practitioners to support and the facility closed in 1925.

As the story is told, one day, several senior residents at the Presbyterian Hospital in New York City were discussing their hopes to work in a rural hospital. A junior resident, Dr. Henry S. F. Cooper, overheard their conversation and mentioned that he knew of a vacant, state-of-the-art 100-bed hospital in Cooperstown, New York. Dr. Cooper was a descendant of Judge William Cooper, who had founded the village of Cooperstown in 1787.

The residents were intrigued. Within minutes, Dr. Cooper had crossed the street and was sitting in the home of Stephen C. Clark, Sr., who had become interested in the empty hospital his brother Edward had built. Dr. Cooper suggested the idea of reopening the Cooperstown hospital, with Mr. Clark's support.

In March 1927, the hospital reopened with Dr. George Miner Mackenzie assuming directorship in 1929. He served as both director and physician-in-chief for the next 18 years.

Dr. Mackenzie envisioned an ideal rural hospital dedicated to patient care, education and research, where the practicing physicians were full-time and salaried. His guiding philosophy was to create the strengths of a university hospital in a rural region. His vision, which shaped the hospital's original mission, continues at Bassett today.

A Leader in Rural Medicine

"Construction at The Mary Imogene Bassett Hospital in Cooperstown of proposed facilities for the critical administration of total-body radiation to man, should expedite the clinical development of this promising field."
- Editorial, The New England Journal of Medicine, September 12, 1957

Under Dr. Bordley's leadership, education and medical research began to grow, as did Bassett's reputation for innovation and leadership in rural medicine. Dr. Bordley expanded Bassett's education programs to include nurses, and in response to nationwide nursing shortages, Bassett initiated undergraduate nursing education and affiliations.

Research at Bassett boomed in the 1950s with the award of numerous grants and the assembly of a pioneering group of researchers including Dr. Joseph W. Ferrebee, Dr. E. Donnall Thomas, Dr. Theodore Peters, Jr., and Dr. David A. Blumenstock. In 1956, these Bassett physicians completed the first bone marrow transplant in history. The bone marrow from a healthy twin was transfused to a twin with leukemia, after whole body radiation had wiped out the sick twin's malignant leukemia cells. Landmark work in heart and lung transplantation was also done at Bassett during this period. In 1990, Dr. E. Donnall Thomas received the Nobel Prize in Medicine for his pioneering transplantation work, which has led to the successful treatment of leukemia.

The 1960s brought the opening of the Bassett Research Institute and in 1967, ground was broken for a new inpatient building that doubled the number of hospital beds. Dr. Bordley's successor, Dr. Charles Ashley, undertook significant expansions in staff, buildings, specialty services and nurse-staffed health centers. During his directorship, the number of outpatient visits increased from 60,000 to 140,000 per year and the overall Bassett staff tripled - from 400 to 1,200. In 1973, the first Bassett nurse practitioner was established in Edmeston and in 1978, a second community health center opened in Cherry Valley. This innovative solution to the shortage of physicians in rural areas marked the beginning of Bassett's regional health center network.

Farmsafe, the predecessor to the New York Center for Agricultural Medicine and Health (NYCAMH) was established in 1980 to reduce the incidence of farm-related injuries and illnesses in the region. At the same time, the Bassett Research Institute began conducting some of the first major population studies of rural Americans.

“This is a great example of a way to deliver health care in a challenging, rural environment with a widespread population with significant health care needs.”
- Dennis Whalen, President of the Healthcare Association of New York State

During the period from the mid-1980s to 2014, Bassett Hospital experienced remarkable growth and change under the leadership of its longest serving president, Dr. William F. Streck, who was appointed acting director in 1984 and formally assumed leadership of Bassett in 1985 through July of 2014, when he announced his retirement.

During Dr. Streck’s tenure, the organization transitioned from a group practice of 70 physicians in Cooperstown, into a health care delivery system employing more than 400 providers. The Bassett system now serves eight counties across 5,600 square miles, logging more than 700,000 outpatient visits a year, and employing 5,000 staff. As a result, the Bassett Healthcare Network, a major economic engine for the region, remains a national leader in rural health care delivery.

Over three decades, Dr. Streck and his management team artfully maneuvered Bassett’s growth, strategically expanding access to community-based primary and specialty care as well as acute care at affiliated hospitals in upstate New York. In Cooperstown, the Bassett Clinic opened its doors in 1992, providing a spacious and inviting primary and specialty care center. The Louis Busch Hager Cancer Center is located within the Bassett Clinic. The primary care network has expanded to over 40 community-based health centers and 20 school-based health centers.

The Cooperstown hospital added a birthing center and special care units, and expanded its dialysis and intensive care units. Advanced cardiac care arrived in the region with the opening of the Bassett Heart Care Institute (BHCI) in 2003. Bassett is also a designated Trauma Center and Stroke Center.

The research mission of Bassett continues to enrich the organization. In 1985, Dr. Streck brought focus to this mission with the formal establishment of the Bassett Research Institute. Over the last 30 years, research gradually transformed to meld successfully into the changing goals of Bassett and the evolution of the health care system. As population health emerged as a national interest, Bassett’s New York Center for Agricultural Medicine and Health and the Research Institute’s Center for Rural Community Health undertook population and health-system studies. That work continues today.

The quality of Bassett’s medical education programs and its commitment to the academic mission remain high. Bassett maintains affiliations with a number of medical, nursing and allied health programs and schools, all of which help attract clinicians to this rural region. The Columbia-Bassett Medical School – a hybrid program with an innovative curriculum and a course of studies focusing on ethics, evidenced-based medicine, health care systems, integration, and leadership and business management – was established in 2009 as a partnership between Bassett and the Columbia University College of Physicians and Surgeons.

Today the cupola light continues to burn in Dr. Bassett's memory and the missions of patient care, research and education remain unchanged. The visionary goals of Bassett's former leaders, educators, researchers, physicians, employees and volunteers continue to guide the organization through growth and change.

Just as generations of patients and families have passed through Bassett's front doors, so have generations of dedicated employees, health care professionals and other supporters whose compassion and caring will long be remembered. These individuals have always been the heart and soul of Bassett and will continue to distinguish Bassett as a health care tradition for many generations to come.

Safe in our Care

You and your loved ones are safe in our care. Take a quick look at how we've evolved to keep you and our caregivers safe and healthy while at our facilities: 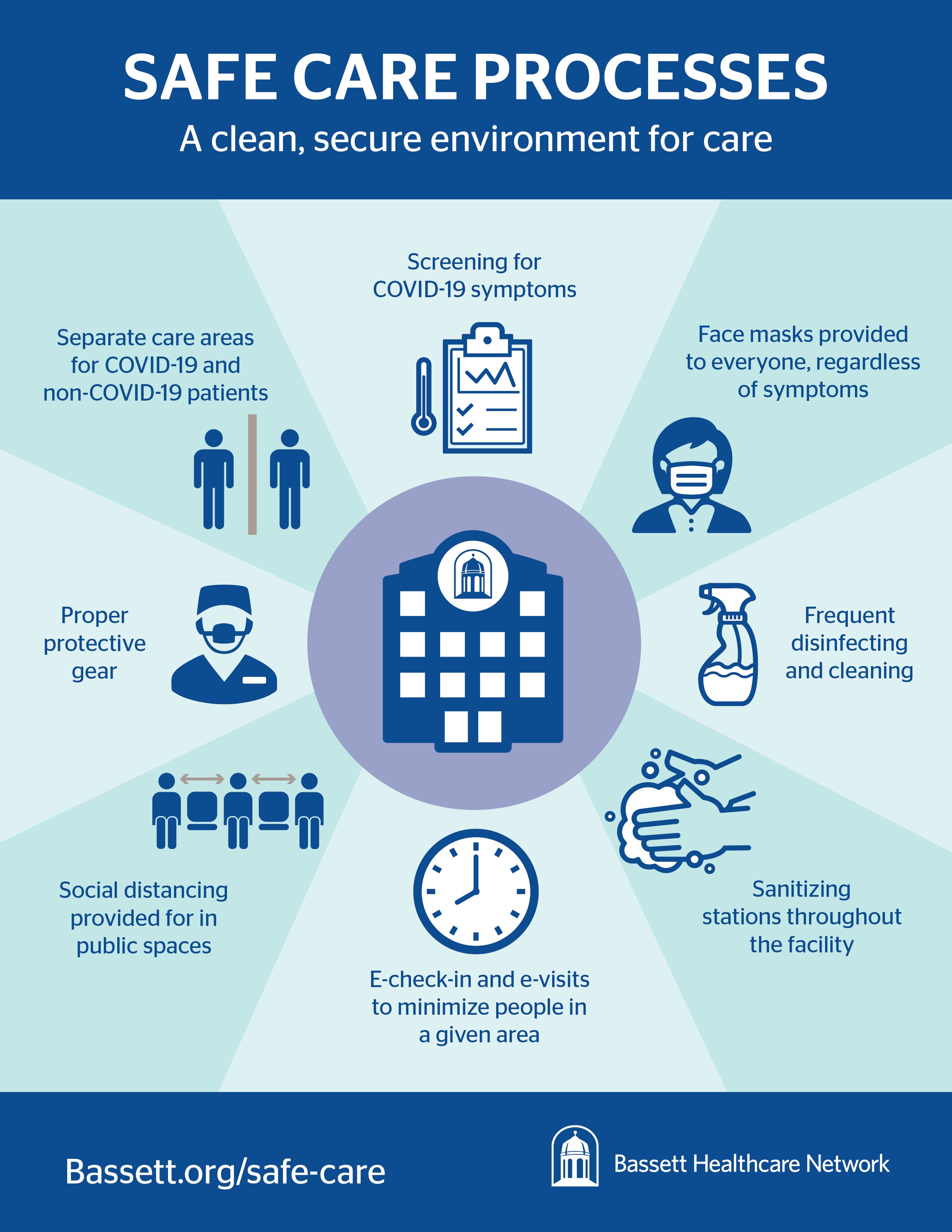 Click the below button to learn more about all of our newly implemented safety measures, including our safe care video, mask policy, video visits, and answers to FAQs.